Not too long ago I received an offer from Mr. Jacobs of Ammo.net to evaluate a couple boxes of Hornady 75 gr. BTHP Match .223.

Ammo.net is an online ammunition supplier that offers a wide range of calibers and brands. What sets Ammo.net apart is that they let you decide what “pro-freedom” organization you would like a percentage of your order to be donated to. These organizations range from Blue Star Families to the NRA to Soldiers Angels. If you are in the market for some ammo give them a look. 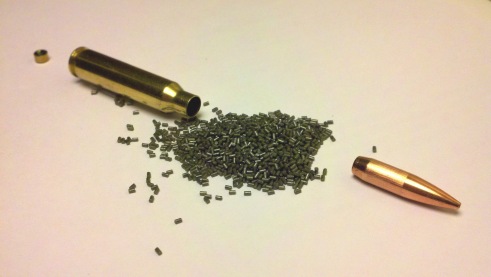 Hornady 75gr Match uses Hornady’s 75 grain BTHP “T1” bullet without a cannelure, a short cut extruded powder, traditional brass case with a head stamp of “Hornady 223.Rem” and a small rifle primer. The cases are boxer primed with no apparent crimp or sealing (nice for reloaders). 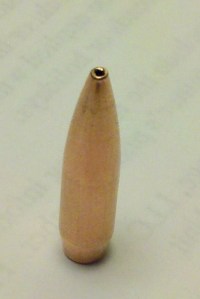 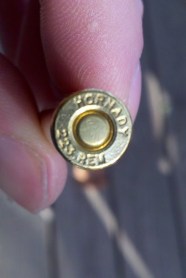 The case neck is crimped, which puts a faint crease in the bullet. In my opinion a crimp is a necessity in a magazine fed, auto-loading rifle like the M4, where striking the feed ramps could possibly force the bullet deeper into the case or knock it out of center.

As I use a 50 yard zero, the first test I did was at that distance, the results were: 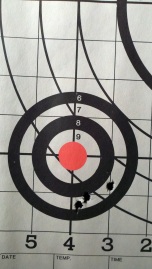 I’m confident that if I had more skill and/or a magnified optic I could easily have made them one hole groups. Even from the sandbag, that 1 MOA dot was a bit tough to be sure I was getting back to my exact POA. Perhaps my 40-something year old eyes are not what they used to be either.

After confirming my zero at 50 yards I moved the target back to 100 and fired two 10 round groups.

PS- The target is that tiny white dot just over the center top of the chronograph. 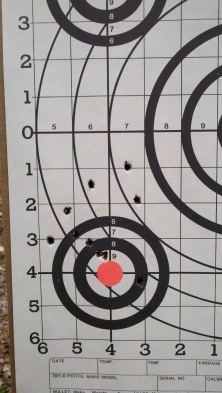 Both groups were 3″ at the widest. At 100 yards I expected to shoot 1.5″ to 2″ high and the center of my groups were right in that neighborhood.

Again…remember that results here are how this ammo shot for me, at my skill level and through an un-magnified red-dot sight. That being said, 3-4″ at 100 yards is a head shot, so I was more than pleased with the ammunition’s performance.

Using a Shooting Chrony Inc. Beta Master Chronograph I measured the velocity of over 30 rounds and came to an average.

From my 16″, 1-7 twist barrel with the chronograph approximately 3′ from the muzzle I measured a top end velocity of 2576 fps, a low end measurement of 2465 fps and an average velocity of 2509 fps.

In my experience, the Hornady 75 gr BTHP Match ammo appears to be a reliable, accurate round that I felt comfortable would hit whatever I was aiming at provided that I did my job from the trigger side. If you are looking for a heavier 223 round for hunting/defense it would be worth your while to take a look.